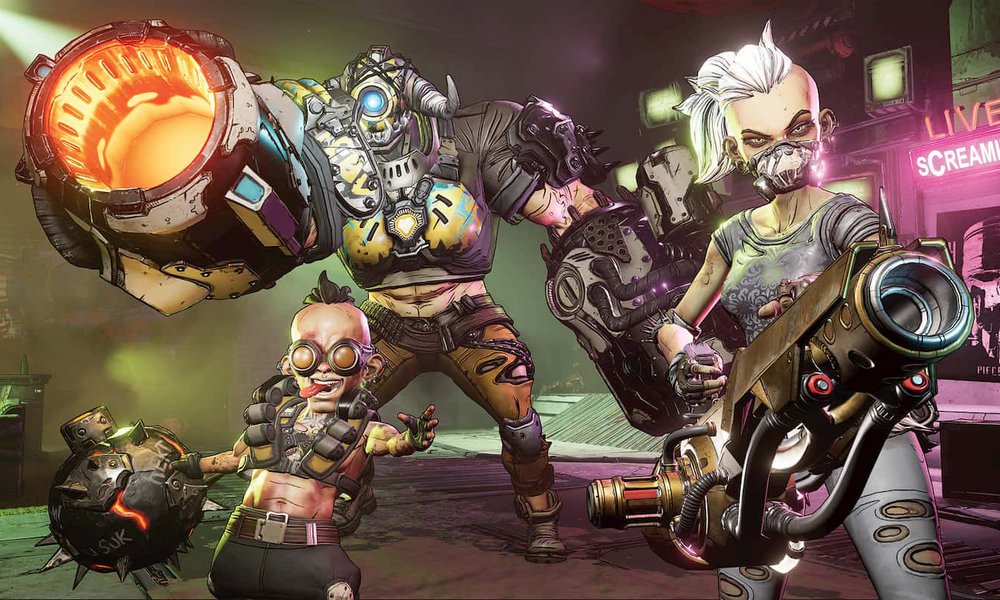 It's been several years since we were last given a proper Borderlands sequel. After the release of the Pre-Sequel and the hugely popular Tales of the Borderlands spinoff, it was starting to seem like Gearbox was giving us the ol' Valve treatment by refusing to produce a third numbered title. Well as we now know, this is not going to be the case, and yesterday fans of the over-the-top looter shooter franchise got their first glimpse of things to come.

As anyone who has played the previous titles can attest, player mechanics were not as plentiful as one might hope. Most of the action revolved around unloading clips into your enemies' faces, with an occasional opportunity to utilize the rather disappointing and under-powered melee attack if you were feeling lucky. Aside from those basic actions, your character really didn't have much else to do other than jump around like a madman - as if that was going to keep the nasty skrags from chomping a chunk out of your butt.

With Borderlands 3, players can finally use their movements more strategically. There is what I'm going to call an "action slide", which in the demo effectively showcased that proper application could allow the player to dodge some attacks. It doesn't sound like a game-changer, but I'd invite you to recall how previous installments forced you to just take beatings without means of defending yourself. At the very least, it's nice that we are being granted the ability to potentially outmaneuver our opponent. 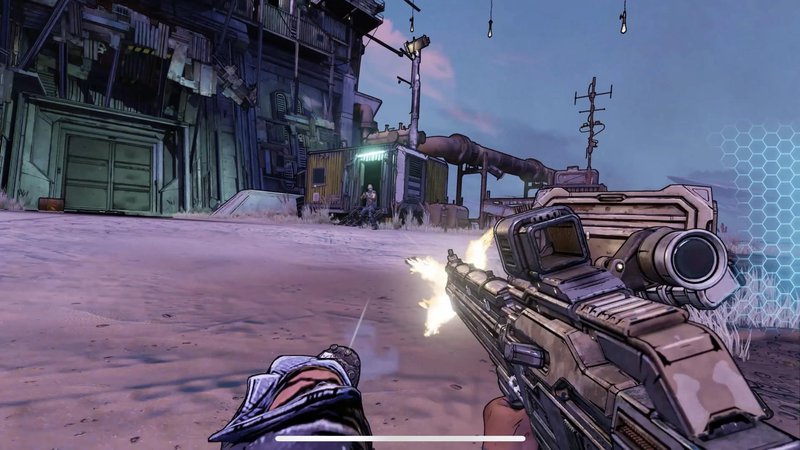 The second notable addition to player mechanics is the absolutely novel ability to put those big, bulky arms to use and actually climb ledges. This one is definitely long overdue, as I'm sure many have been let down by a vertical leap falling just short of that place you could almost reach, questioning why your character couldn't just grab on to something to help them the rest of the way. Well, now you can. Ain't no mountain high enough.

One man's trash is another man's OH FU---

Out of all the gameplay additions coming to Borderlands 3, this one has me the most excited to use. During the demo, we got to see a new benefit to discarding your outdated or unwanted guns. If one could compare weapons to pokemon, then throwing away that mediocre shotgun is essentially like playing roulette with your pokeballs. The moment that gun hits the ground, you may suddenly witness it sprout legs and charge towards the nearest psycho. Or you might be treated to a fireworks show that incinerates all surrounding enemies. The possibilities are endless (maybe).

Since Borderlands' claim to fame is its vast array of weapon, I think that giving even the worst of them a chance at some playtime with randomized discard effects is a really clever addition to the player's rotation. You might even find yourself intentionally holding on to what would otherwise be a trash weapon just in case it might bail you out of a sticky situation.

he may have skipped leg day, but that ain't gonna stop him from wrecking your ass

Another addition to gunplay is the inclusion of two, count 'em, TWO firing modes, meaning that every gun you come across has a primary and secondary function. This is something that classic first person shooters such as Unreal Tournament and Quake have done for literally decades, so it's interesting that this mechanic is just now coming Borderlands in 2019. That said, it does appear that Gearbox is trying to make up for lost time by making the alternative firing mode distinct and effective, which ultimately gives more power to the player and adds variety to their play-style.

Every numbered entry in the Borderlands series has seen the main character progress to a location that essentially serves as the epicenter of the game. This is where players can buy/sell gear, take on new missions, and otherwise take refuge from the savage wasteland beyond its walls. In Borderlands 2, this particular safe-haven is appropriately named "Sanctuary", which if I had to guess from context clues, is likely named for it's relative safety amidst a nightmarish chaos that only death can save you from.

Without spoiling anything, let's just say that Borderlands 3 will be introducing the third iteration of Sanctuary. The first one wasn't exactly a blow-away success, and according to Gearbox head Randy Pitchford, we just don't talk about Sanctuary 2. We could probably speculate that something went horribly wrong the second go-round, so he's to hoping number 3 pans out. Anyway, Sanctuary 3 is where it's at. I say this because rather than being another trash heap surrounded by rudimentary fortifications, the third iteration of our central hub is quite literally out of this world. Yea, it's a space ship. A big ass motherfuckin space ship. 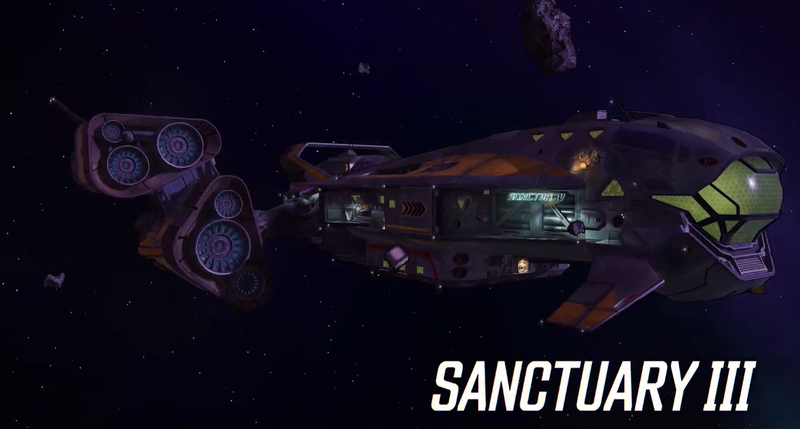 Hey its ya boy vault hunter welcome to my crib

The demo showcased the vastness of its size (it's bigger on the inside), and how it serves as being the player's own version of MTV's Cribs. While inside, you are able to modify and upgrade its facilities, as well as decorate its walls and the like with items and collectables you've found throughout your travels. You'll also be sharing it with some familiar faces, which if the demo was any indication, will likely be the greatest hits of the entire Borderlands series. It's not just for fan-service though, each NPC aboard the S.S Sanctuary 3 will provide the player with something of value - whether that be bounties, items, or just good conversation.

If you haven't already guessed it - yes, Borderlands 3 is going to feature interplanetary travel, and your own personal flying city will be ferrying you from planet to planet as you, I assume, keep hunting for a vault or something. That's still the plot, right? Anyway, not much is known about how the addition of what is effectively borderless travel will impact a game with the word "border" literally in the name. From what I saw in the demo footage, it looks to be injecting Borderlands 3 with some much-needed diversity in its scenery.

In the first game, most of your surroundings ranged from dirty mud-pits to muddy dirt-pits, with the second game only slightly improving on that with the inclusion of icy dirty mud pits. Needless to say, when playing previous Bordlands titles, at no point did I feel like I was traveling through a Bob Ross painting, or ever had the inclination to stop and take in the view. Borderlands 3 seems to be wanting to inspire some awe with, from what we've seen so far, truly impressive looking set-pieces ranging from neon-laced high-rises to lush, green space jungles. That said, I'm really glad that Gearbox is finally easing up on the post-apocalyptic thing. As much as I'm into the Mad Max aesthetic, I think changing it up a little bit can breathe some new life into the series. 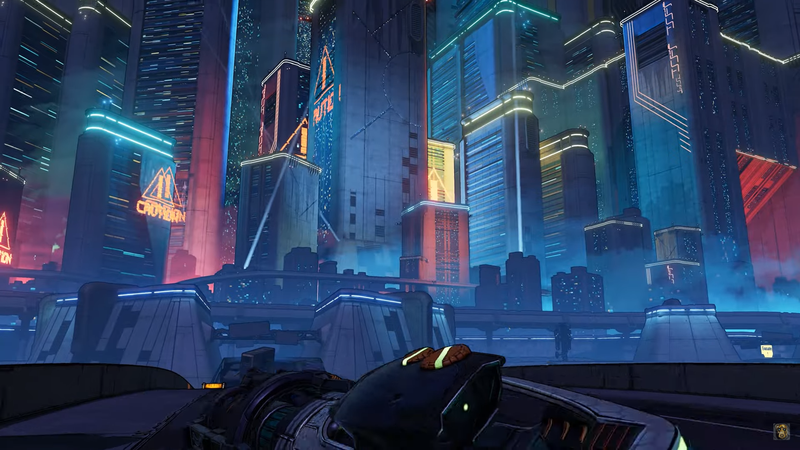 There were a few other key points that were discussed and/or clapped for in the preview, but none that got me particularly jacked for Borderlands 3 like the others. Some of those small but still noteworthy features were:

Those are really the main takeaways I got out of the nearly hour-long preview, and from what was shown during that time is enough to get me back on the Borderlands train.

What did you think of the gameplay preview? Did I leave out anything that you thought was noteworthy? Let me know in the comments! 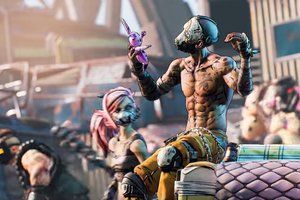 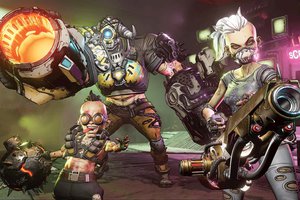 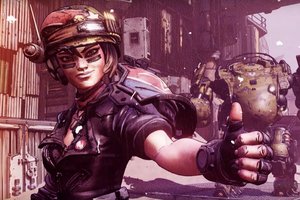