By Luke Hardwick | 2 years, 6 months ago

"I ain't got time to bleed", I mutter to myself as I turn back the clock a few moments after taking some minor damage from an especially vicious mutant chicken. This would happen several times throughout the fight, where I would find that my chosen action would result in one of my characters getting nicked by a talon or bitten in the behind. I simply couldn't allow it, and because Iron Danger allows me to rectify my missteps by undoing them in real-time, I'd never have to.

The ability to literally role back time in the midst of combat is, short of using an exploit, one of the single most powerful mechanics available to players. Some might consider it to be equivalent to an ill-regarded practice known as save scumming, which is the act of rolling back to a previous save as to avoid penalties when a playthrough goes awry. However, Iron Danger's gameplay schtick hinges on the player's ability to turn back time to, in essence, achieve their most ideal outcome. While some my turn their nose up at this, I think the game is much better for it.

For a bit of backstory, Iron Danger is a fantasy CRPG heavily steeped in Finnish folklore (thanks Wikipedia). The story revolves around Kipuna, a village girl who, through a series of unfortunate and catastrophic events, becomes imbued with the power to manipulate time and defy death itself. Soon after, Kipuna finds herself at the center of an idealogical war that will ultimately prove to be the test of her strength and loyalties.

The graphics are adequate, and the world itself is visually pleasant. The art style is reminiscent of the Torchlight series, which is fine by me. Additionally, much of the dialogue is voice acted, and I actually find myself caring about the characters. For the most part, the chemistry between Kipuna and her chosen companion is fun to watch play out, so no complaints there. However, Iron Danger's selling point isn't its graphics, story, or characters - though those things definitely help. Rather, it's the gameplay that makes Iron Danger stand out amongst its peers.

Think contemporary RPGs such as Divinity: Original Sin, or Diablo 3 - except with a more inviting color pallet. Then consider how either of those games could possibly intersect with an audio editor such as Audacity or Garage Band. What you end up getting is Iron Danger, which blends the hotbar driven gameplay that you've come to expect with those aforementioned titles, and a slider interface that's used to manipulate the passage of time. It sounds a little weird, but it actually works really well. 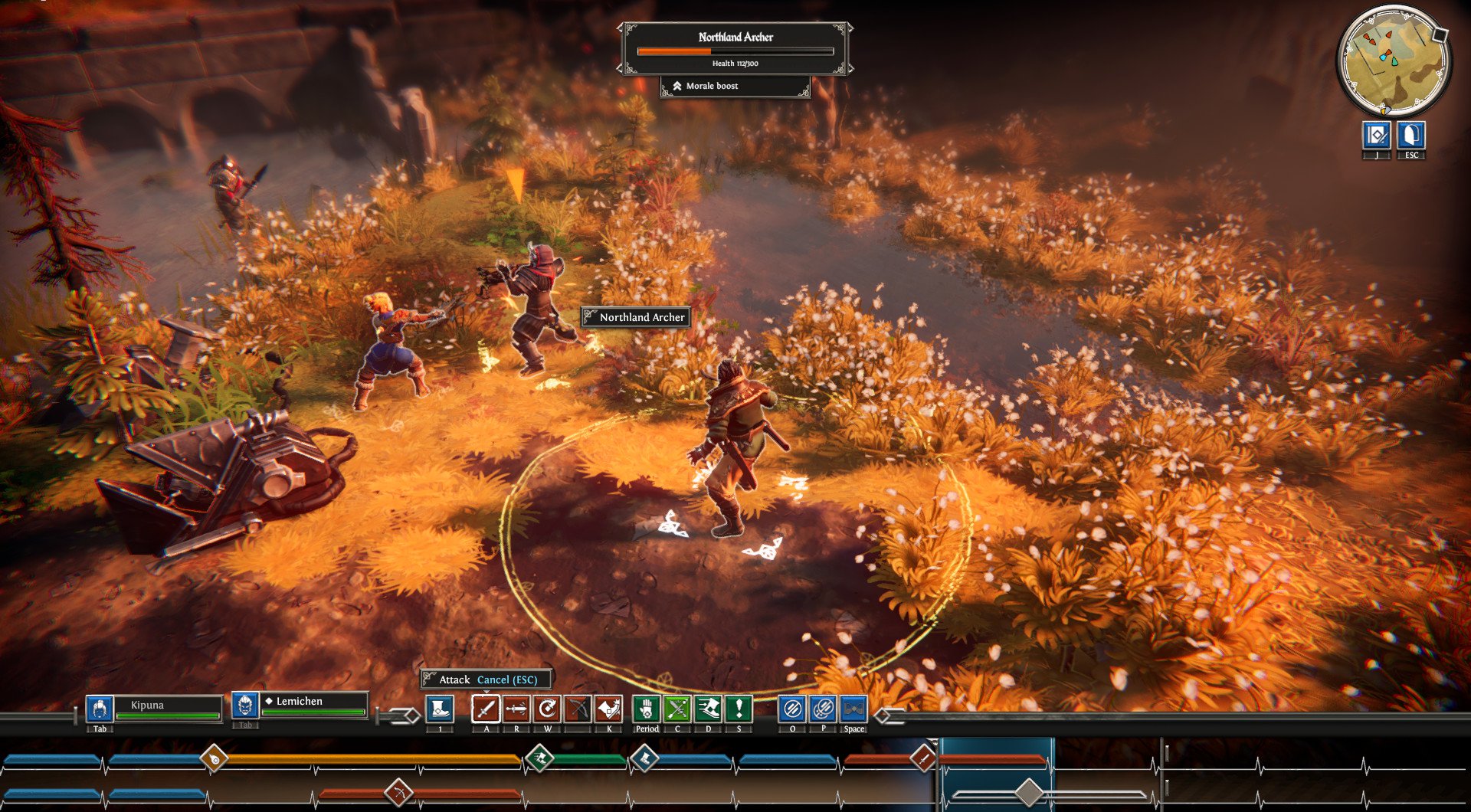 I've talked at length about how much I'm into Iron Danger's time-rewind mechanic, so I'll try not to repeat myself too much. However, it really is the lynch-pin of the whole game. The ability to harness time itself fundamentally changes the way you approach gameplay, which creates an interesting dynamic between the player and their journey.

In most RPGs, I tend to feel like combat is more of a means to an end rather than a destination - whether it be to grind out levels, develop character stats, or to simply advance the storyline. That is to say, combat can end up feeling like a bit of a chore. While combat does indeed contribute to your ability to advance the storyline, Iron Danger doesn't really subscribe to those other constructs - such as leveling or stats. As a result, combat becomes the central focus of the game, which I imagine is why the developers made it as dynamic as it is.

For instance, when there's only one or two enemies on screen, it's fairly easy to get away with taking a more cavalier approach to dispatching them. With two active characters under your command at any given time, it's not unheard of to simply shock and awe your opponents into the ground without any consequences. However, when you get up in numbers and find yourself facing down a small militia's worth of foes, you need to be a little more calculating if you've any hope of surviving. 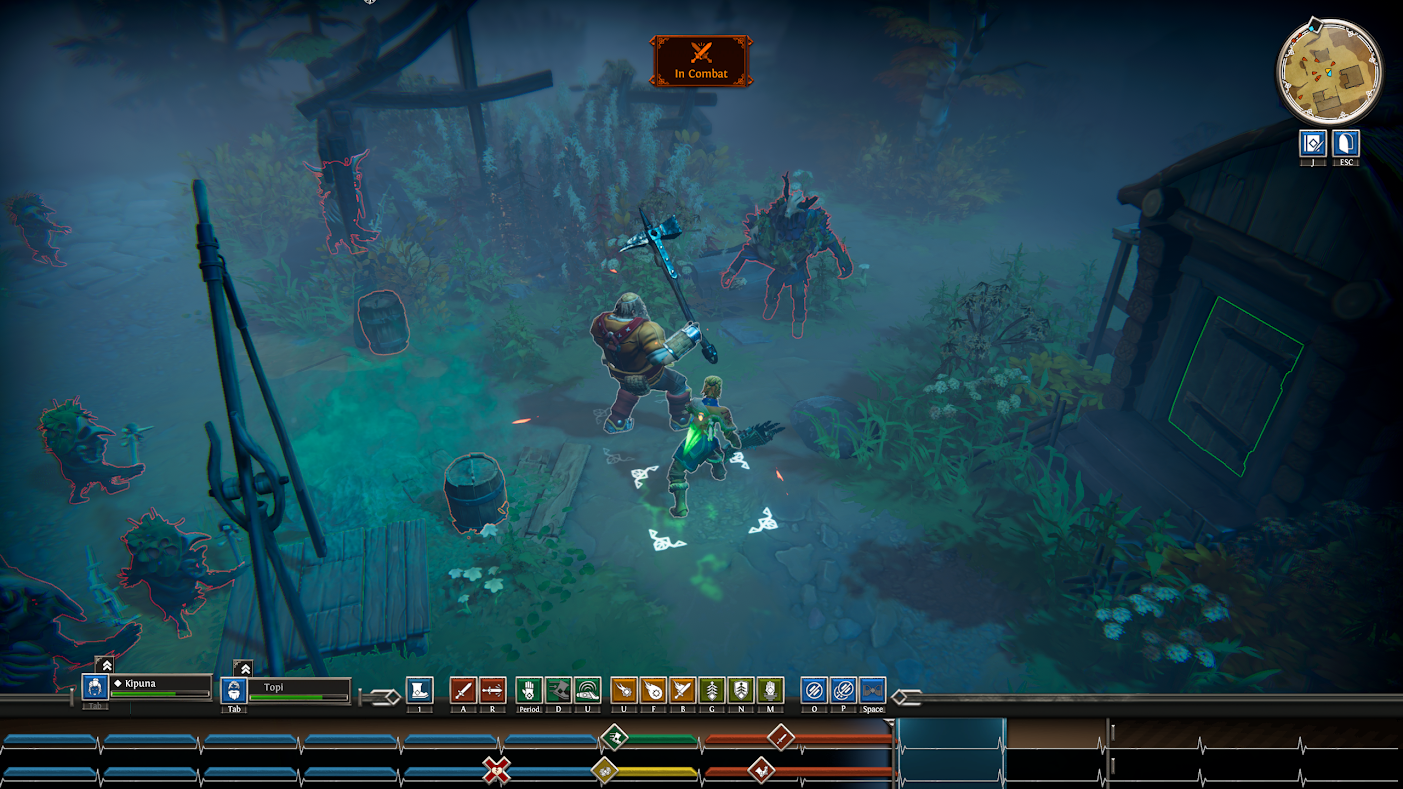 Your characters aren't particularly beefy and can easily be overwhelmed, which it's why it's so important to maintain awareness and a level head during combat. At first, I found it to be a little difficult to juggle two characters at once, and honestly, if not for that coveted allowance of 5 seconds to explore frontwards and backwards, it would actually be untenable. However, being that I'm able to focus on one character for seconds at time, then switch over to the other and replay those same frames from their perspective provides for some satisfying moments where proper coordination can pay off in a big way. Alternatively, if things don't quite pan out the way you had hoped then you can always roll back the clock and try something else. It's almost as if Iron Danger just wants players to be the best versions of themselves, and to play without having to compromise.

If there's one thing that I learned from playing Iron Danger, it's that I don't have to accept anything the way it is if I have the ability to change it. A powerful sentiment in the abstract, but even more so in the context of a game that literally lets me time travel. What more can I say about how much I enjoy Iron Danger. It's an understated fantasy RPG that's both charming and straight to the point. The built-in rewind mechanic is a literal game-changer, and allows an otherwise tedious process of button smashing to become much more calculating and rewarding. For these reasons, Iron Danger has earned its place as one of my favorite games of 2020.