By Luke Hardwick | 2 years, 6 months ago

For decades, sharks have been portrayed primarily in one of two ways. Amongst the scientific community, they are viewed as instinct-driven predators that have fallen victim to misconceptions stemming from reckless human interference. Then, because Hollywood, there's the sensationalist version of sharks that, ever since 1975's classic thriller, Jaws, has fed on people's most irrational fears. Although anyone who has watched Shark Week would know that the former of those two portrayals is factually more accurate, sharks remain in the public mind predominantly as a terrifying force of nature, ever lurking just below the surface, bent on killing and consuming anyone - or anything - that might cross their path.

Now, with those two distinctly opposite characterizations in mind, let's assume that your ideal interactive shark experience involves taking the latter of the two and injecting it with some Michael Bay caliber over-the-topness. If that's the case, then Maneater may just be the game for you.

My name is Finigo Sharktoya. You killed my mother. Prepare to die.

The first thing that Maneater gets right is its satirical framing, which is presented to us in the form of an ill-conceived reality TV Show documenting the tumultuous relationship between man and nature. The show's production is split between two crews - one that follows the exploits of known shark-hater Scaley Pete, and his vendetta against one particular family of carcharodons, while another crew follows the game's finned protagonist, whose actions and movements are intermittently narrated by none other than Saturday Night Live's Chris Parnell.

Straightaway, players take control of a full-grown "Bull Shark" (though it's really modeled after a Great White) and are given an effective, if not slightly overwhelming demo of what it's like to be the ocean's foremost predator. Without giving too much away, this brief segment of the game ends rather abruptly and you come to realize that it was in fact just a prologue. Then the actual game begins, and players find themselves in the unenviable role of a newborn shark with one objective: get bigger, get stronger, and get revenge.

After some significant growth and coming to the realization that the real journey was the friends you ate along the way, the game's climax consists of a final, if not a little underwhelming showdown with Scaley Pete.

Sharks on a Plane

Sharks are fins-down the ocean's most efficient killing machines. They are, by evolution's design, entirely motivated by hunger and the desire to procreate - and they are pretty damn good at both of those things. However, since the latter of those two things might be a little too ambitious to feature in a game, not to mention thematically challenging, the developers at Tripwire instead decided to take a shark's killing capabilities and turn them up to 11. As a result, players get to take control of a shark that never tires or sleeps, and whose hunger is never sated. Overkill? Yes, but I think that's the point.

As a young shark, the only things you need to worry about is surviving and thriving. Fortunately, the former becomes increasingly more feasible as you level up. In addition to numbered levels - with the max being 30 - there are milestones that, once reached, result in your shark growing in size and ability. At first, the transitions between pup and adolescents, to adult and so on are fairly straightforward, but then Maneater introduces a thoroughly sci-fi "Evolution" mechanic that essentially fits your shark with a freakin' laser beam.

Despite how absurd they might be, Evolutions play a vital role in your ability to progress through the game, as they grant abilities that sharks wouldn't normally have. For instance, equipping one such Evolution - and there are multiple - infuses your shark with electricity and inflicts AOE damage by zapping any creature you come into contact with. Another allows your shark to breathe on land for a short while, which I found to be highly effective when I needed to do a bit of lawn mowing. If it wasn't already abundantly clear that Maneater isn't going for realism, allow me to invite you to reconsider. 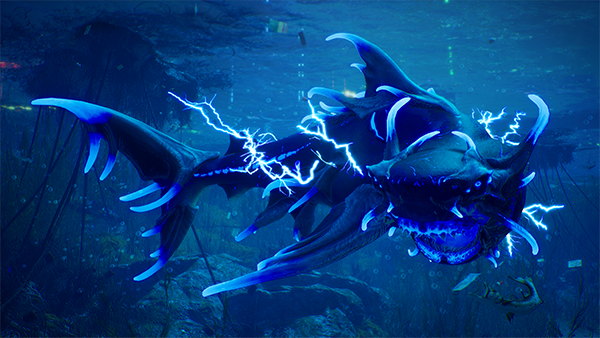 Do these look natural?

Unlocking Evolutions is a fairly straight-forward process. All you gotta do is increase your Infamy, which is a process similar to Grand Theft Auto's wanted levels in that killing enough humans results in the cops - or in this case, hillbilly shark hunters - showing up in a small armada of boats to put an end to your rampage. Tear through enough of them and a boss hunter will arrive on the scene to put the fear of God into you. Fortunately, these bosses are just as susceptible to an aerial shark attack as any other red shirt and are easy to dispatch. However, as your infamy increases, so too does the hunters resolve to put you down. They'll start to arm themselves with assault rifles, dynamite, and even electrical force fields. Though, considering the aforementioned Evolution that infuses your shark with electricity, I'm not sure how that makes sense, but whatever. In any case, with each level of infamy gained, the ante is effectively upped. It might be tempting to try and blow through all of the boss hunters in one go, but try to space it out. Once you've taken them all out, you'll find little reason to pick a fight with humans after that.

While some might find Maneater's gameplay to be repetitive, I, for the most part, did not find this to be the case. Though most, if not all missions involve you hunting prey of a certain kind and consuming X amount of them, the act of doing so never grew stale. One moment you might find yourself decimating a group of beach goers who were, somewhat irresponsibly, partying too close to the shore. In another, you may be tasked with pulverizing a fishing vessel into a metallic pulp and eating its entire crew. To the naysayers, I'd say that it's just like Call of Duty, except you're a shark.

One thing I would stress is that the best way to experience Maneater is with a controller, and a sturdy one at that. In order to adequately harness your shark's full killing potential, you'll be smashing buttons like they owe you money, and jerking those thumb sticks like, well, I won't go there. I honestly can't imagine trying to do go it with a mouse and keyboard, as there are simply way too many movements that need to happen at once to properly steer your shark whilst in combat.

Born on the Bayou

Set in a fictional version of the Gulf Coast, Maneater's main story plays out across eight unique, albeit water-based locations. These range from an alligator-infested bayou, to a highly-exclusive lakeside community reserved for only the richest of denizens, all the way to the murky depths of the open ocean. Each location possesses its own unique characteristics - including underwater wildlife and vegetation - that fits a surprising amount of diversity into what is otherwise a modestly sized map.

Being that your shark isn't much of a talker and whose only discernible personality trait consists of destroying everything in sight, interactions with the world are expressed by way of the narrator who will occasionally chime in to offer an explanation for player behaviors. Sometimes these asides will offer factual information meant to reinforce the illusion that this is a documentary, while other times will carry the cadence of a joke. That said, certain behaviors - such as munching on fish or provoking the hunters wrath - will be met with the same line of dialogue, which, despite Chris Parnell's excellent delivery, can quickly become tiresome. 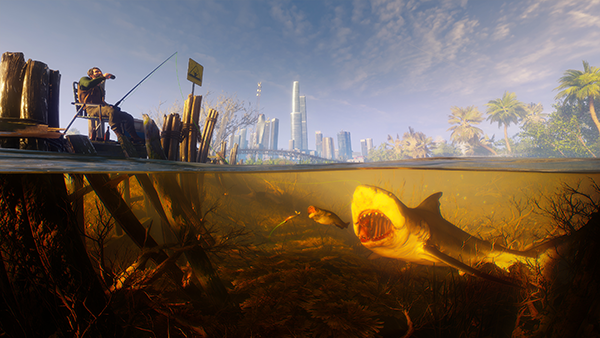 Thanks but I'd rather not Go Fish.

Various points-of-interest, called "landmarks", can be found scattered throughout each location and serve as the bridge between the shark's underwater environment and the world above. When encountered, the narrator provides a brief description of what the landmark is and where it came from, which I found to be immensely entertaining. Landmarks can range from macabre displays of human error - such as an underwater skeleton buried under several feet of shopping bags - to tongue-in-cheek references to popular culture.

All in all, I ended up clocking in about 15 hours on Maneater. That includes reaching level 30, maxing out my evolutions, and completing most of the side missions. After the credits rolled, I was invited to continue playing in the sandbox to presumably continue wreaking havoc on a significantly more vulnerable oceanic community. However, without any new areas to explore, story threads to pursue, or even the potential to level up again, I think I'm gonna go ahead and put this one on the shelf. That said, at $39.99, Maneater is a fair amount cheaper than most full-fledged game, so its lack of replayability or multiplayer is somewhat more forgivable, and it's initial playthrough is well worth the price of admission Maneater is a bloody good time, but definitely not for anyone with a weak stomach. Gameplay is more satisfying than it has any right being, and the world itself is surprisingly thought out. While there are some small issues with scale and object-to-shark ratios being inconsistent at best, it doesn't detract from the overall experience of being the ocean's foremost predator - albeit an extraordinarily exaggerated version. There's no doubt that, if the category existed, Maneater would definitely be a contender for "Best Shark Game".